Take a line of unit length and remove the piece between 1/3 and 2/3. The two remaining pieces are 1/3rd the length of the original. We can think of each as being a smaller image of the original line and again remove the middle third of these two pieces. This leaves us with 4 identitcal lines each 1/3*1/3 = 1/9th of the original piece. The process doesn’t affect the end points of each line, and repeat this middle-third removal ad-infinitum and you end up with a set of infinitely many points, the ‘Cantor dust’.

This, the middle-thirds Cantor set, is a famous mathematical object. After infinite steps the set has uncountably many points but no length. The original definition of fractional dimension was devised to capture a property of similar sets that were ‘large’, in the sense of being infinite in number, and dense, but that still had no volume or length. The first proposed measure of these sets was the Hausdorff dimension which takes on integer amounts for relatively smooth objects like lines and cubes but fractional amounts for ‘rough’ objects like the Cantor set. The cantor set also has the property of being self-similar, each iteration is a scaled image of the previous set. This latter property is one associated with fractal objects and one reason why the term ‘fractal-dimension’ is commonly used in place of ‘fractional-dimension’.

(If you are interested in more mathematical details, this post is based on a nice and not too long paper by Tilmann Gneiting. 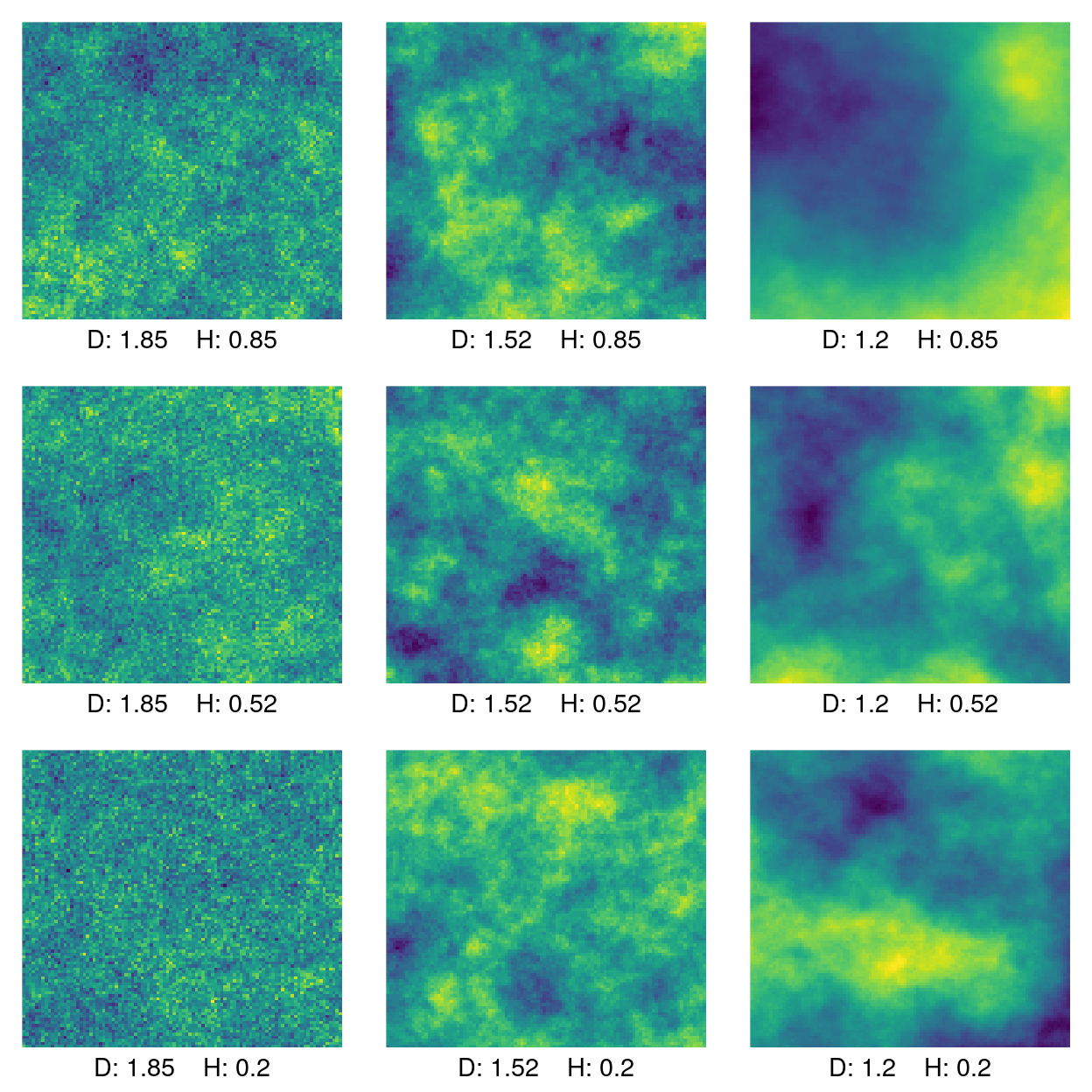 Another way to see the effect is by looking at the cross sections. Each of the following graphs is a vertical slice from each of the corresponding random fields above. 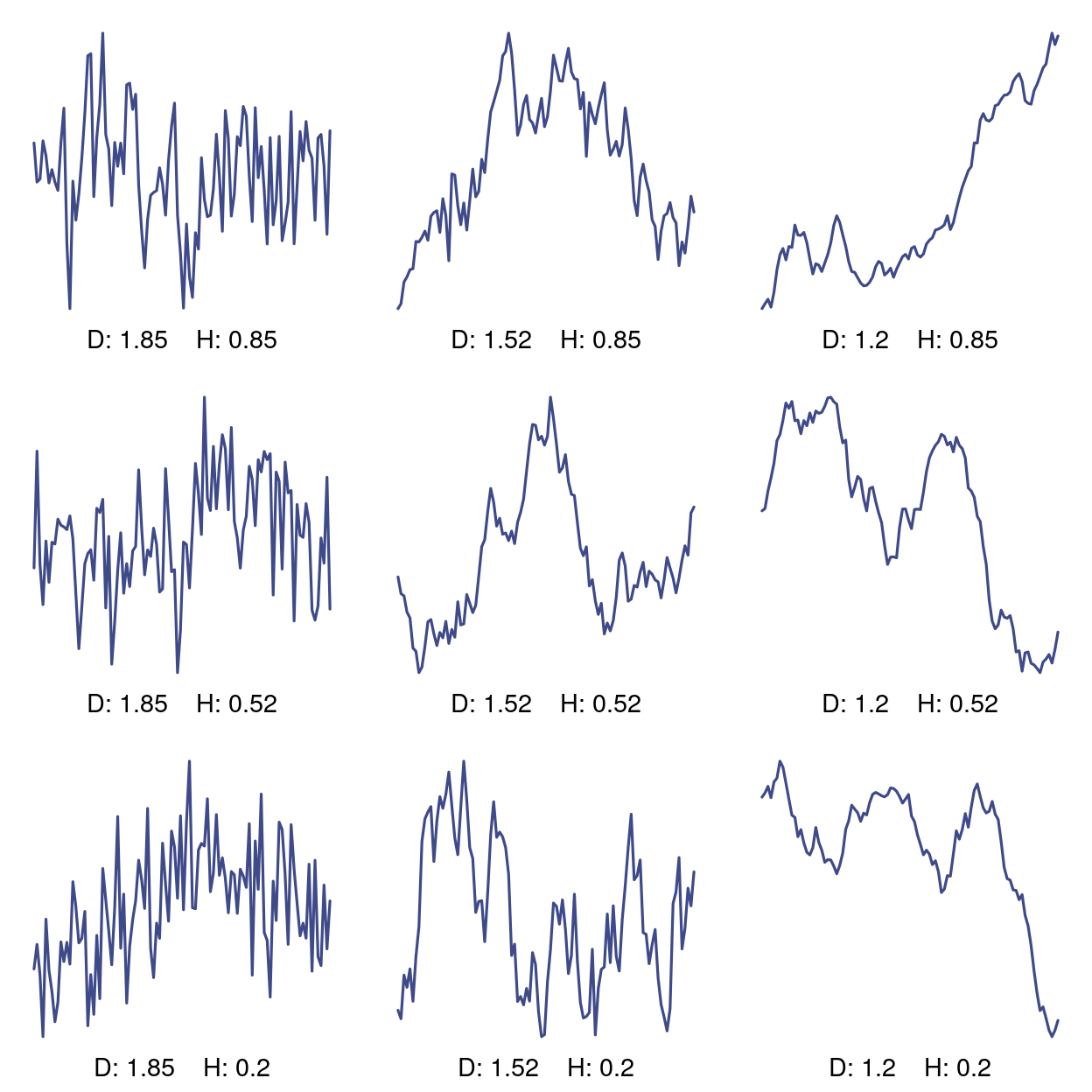 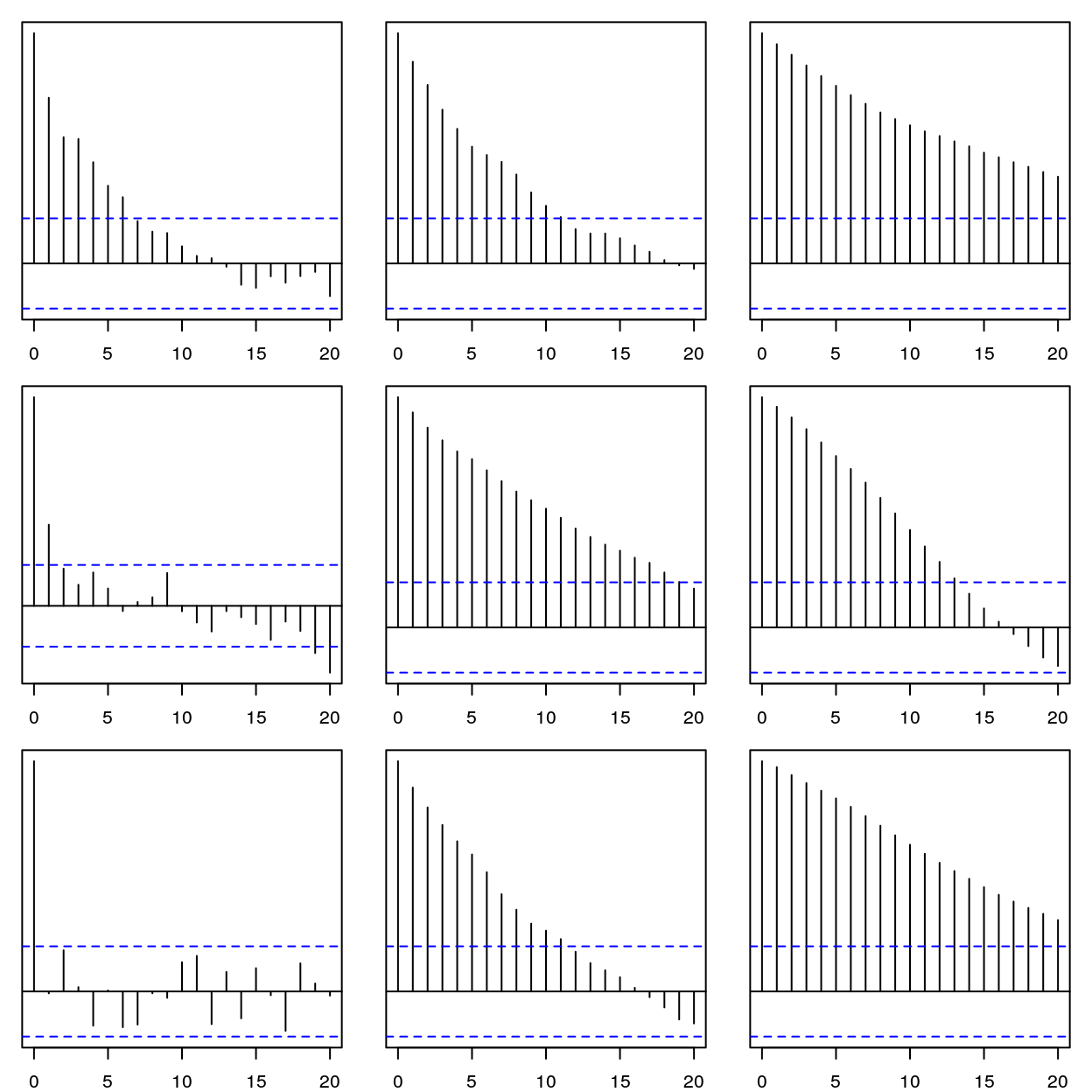 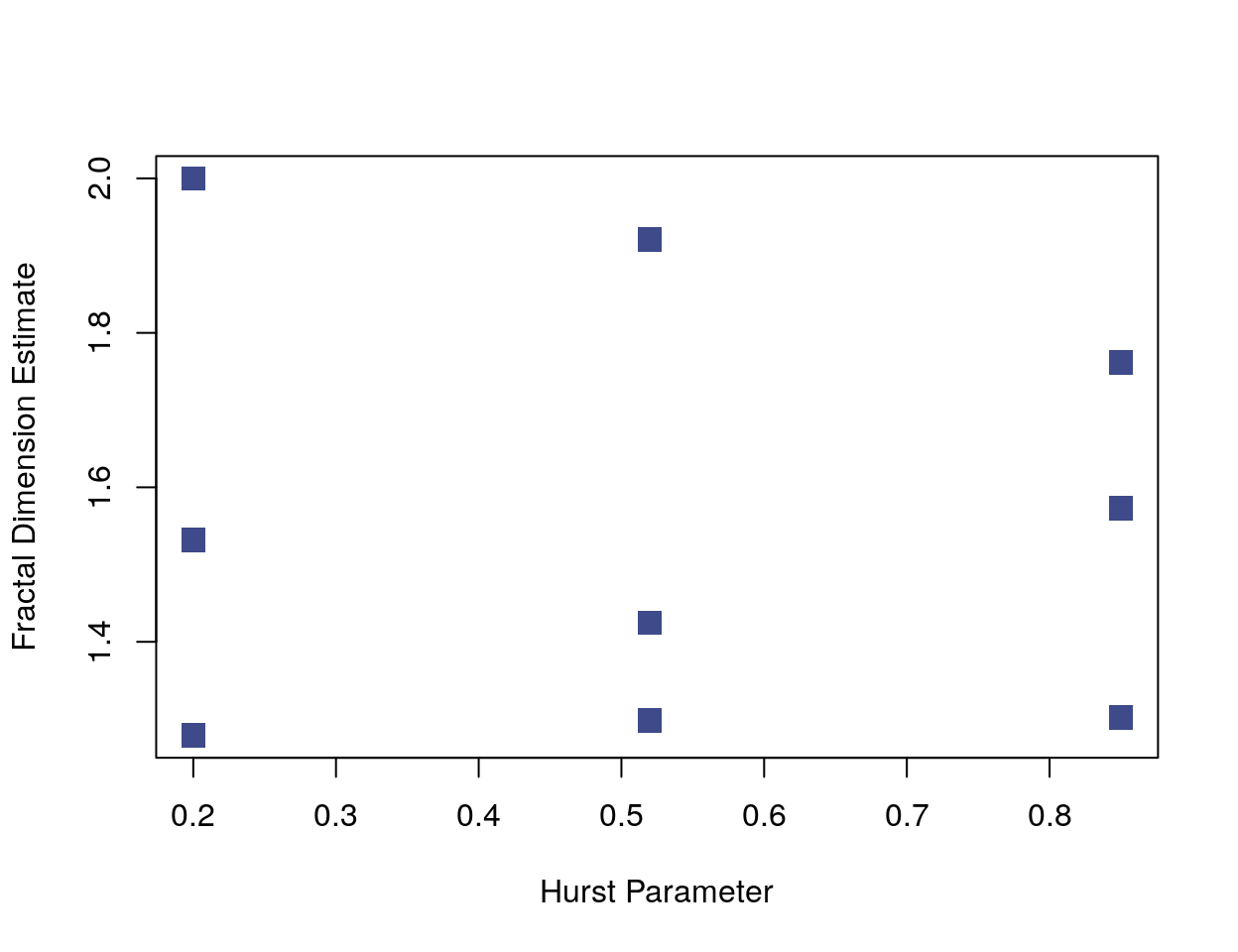 For these tests, I generated 50 time series of an ARMA process. The moving average(MA) component has a random element so each time series will be unique. Only the autoregressive parameters were varied for each time series. 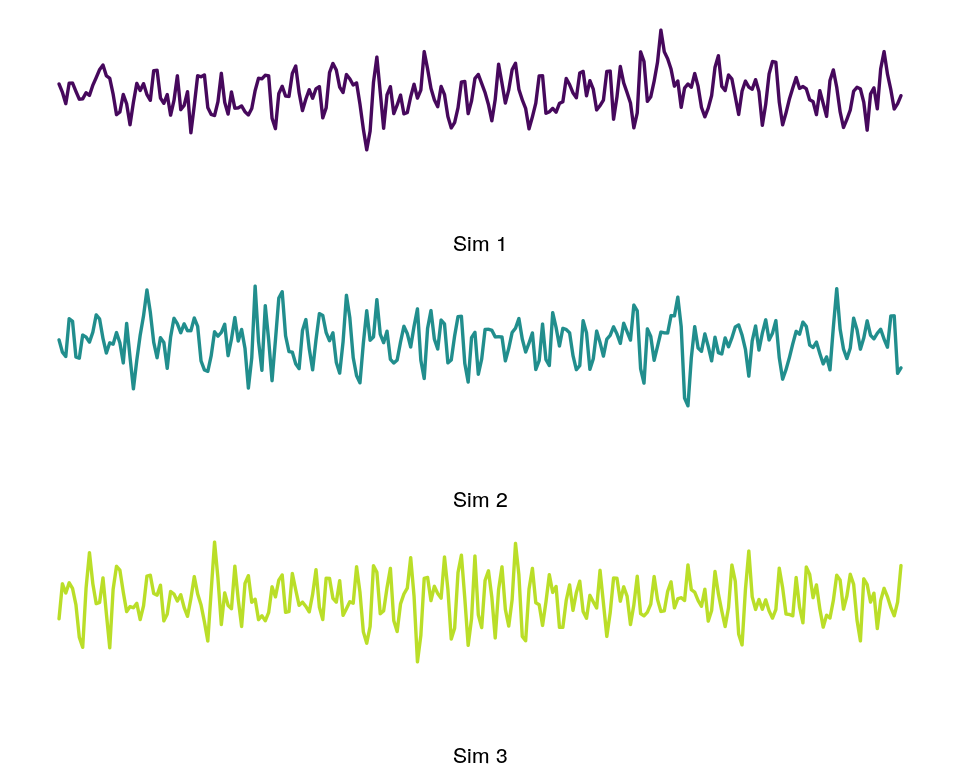 Here’s how the fractal dimension estimate separates samples from our three simulations. 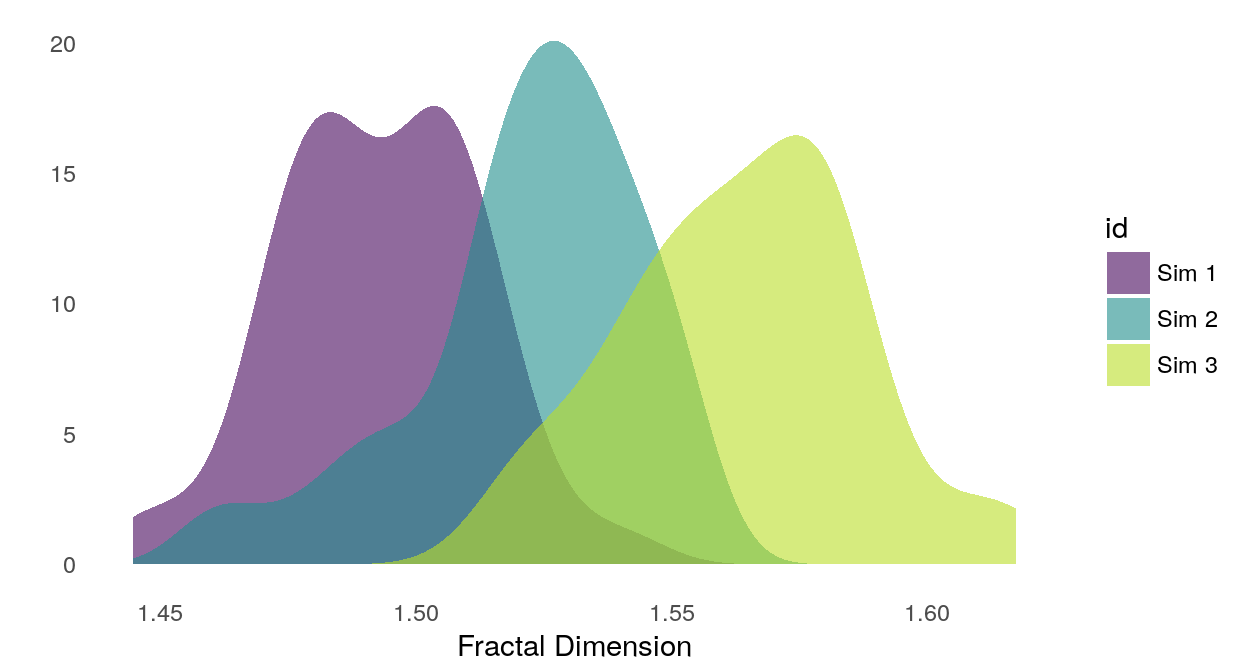